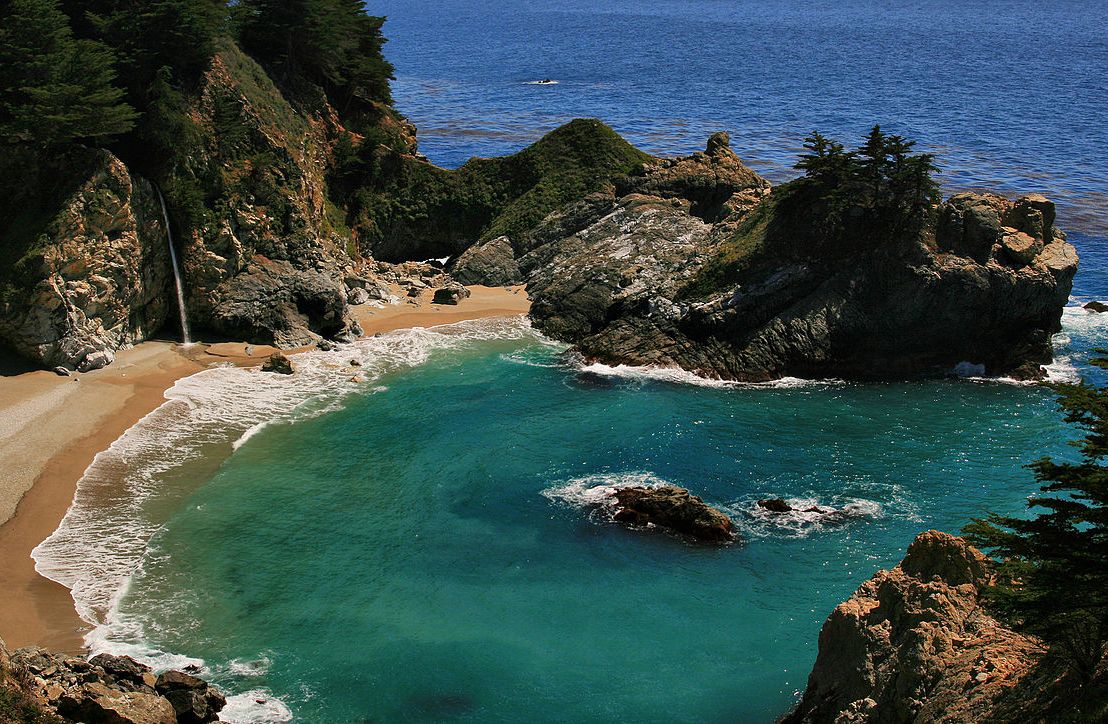 Thin clouds slowly march across the yellow, orange, red, and slowly deepening blue sky as a lone figure steps out of a small cottage that sits high on a cliff. The light spring breeze pushes back on the figure’s midnight blue cloak and brushes back some long auburn hair from a pale slender face. A pair of sea foam green eyes peers down the cliff as the young woman steps close to the edge of the cliff, staring down into the angry waves below. Water sprays upwards at her, beckoning her to jump, to join the water, and to disappear underneath the cold ocean.

She can hear a voice behind her, a slight smile playing across her lips as she hears a male voice telling her to be careful near the edge. She turns away from the cliff, the breeze pushing her hair out from under her cloak and across her face as she watches a young man with shaggy brown hair pull on a deep forest green cloak over his shoulders, shielding himself from the growing night breeze, covering his crème colored shirt and dark brown pants. He waves at her to wait for him before she does anything crazy. She laughs, the laugh twinkling lightly like bells mixing with the crashing waves below her. She waits for the man to join her on the edge before she slips off her cloak and hands it to her beaux. He kisses her cheek as he takes the cloak and takes a step backwards in order to give her some room.

The woman turns on her bare heels to face the edge of the cliff, spreads her arms up high over her head, whispers a few words to the goddess of the waves, and leaps forward off of the cliff, making sure to push herself far away from the rocks that are jutting out on the cliff’s side. The man glows proudly as the woman plunges into the dark swirling waters below, the ocean engulfing her body completely. She rises above the surface moments later from the curling waves and looks up to see her love staring down at her with a smile on his face. She waves to him then points to the left of him where a path will lead him down to a small cove that is protected from the ocean yet is fed by ocean water and where the water sparkles like crystals under the pale glowing moon. He acknowledges her with a short wave then heads off down the path, her cloak swinging over his arm with the movements.

Once he reaches the end of the path, he slips his cloak off and places his and hers on a low dry tree branch from one of the few trees that scatter around the cove so that they wouldn’t get wet while he and his love sits in the cove. He walks to the nearest boulder that is next to the crystal blue water and sits down, his deep brown eyes watching the still surface as he waits. Soon a head emerges and two sea foam green eyes beam up at him, her long hair fanning out behind her on the water’s surface. He chuckles as she swims closer, lifting her nude body up out of the water until she is leaning on a rock that is slightly submerged below his seat. She pulls her hair over her shoulders and gently runs her fingers through it as she looks back towards the mouth of the cove that enters the crazy ocean beyond it. The water’s surface ripples again and more faces appear, swimming over to the rocks in the water in order to sit down, slipping up out of the water to sit on the still sunned warm rocks while others stay floating in the water, their colorful eyes on the man and woman. The moon beams dances along blue, green, red, purple, turquois, and orange tails as the mermaids and mermen of beyond the Crystal Cove settle in for their nightly story.

The man nods to his friends and pulls out a well-worn notebook, and flips it open to the page where they had left off the night before. He clears his throat and continues to read the fantasy story he has written himself about far off places where humans live in tall buildings and get around by driving strange things called vehicles. The mermaids and mermen listen to every word, as the stars seem to lean in closer to also hear the incredible story. Soon the moon nudges those below as he rises higher in the sky, and the man finishes his story, promising to write the next day a new story about humans and how they have learned how to fly in giant metal birds in his made up world. He says his goodbyes as he stands, shoves his story into his back pocket, and then leans down to pick up his mermaid from the waters, her lavender tail swishing back and forth as he carries her back to the path. The woman grabs their cloaks as they pass the tree where they still hang and the couple retreats home for another night, the cove behind them growing still after the last mermaid swims back into the sleepy ocean to return to their underwater kingdom for the rest of the night.

This is a text widget, which allows you to add text or HTML to your sidebar. You can use them to display text, links, images, HTML, or a combination of these. Edit them in the Widget section of the Customizer.